Climate Change and the Person with Disabilities

The term Climate Change was first used in 1988 by the NASA climate scientist James Hansen. According to IPCC, climate change is "any change in climate over time, whether due to natural variability or as a result of human activity." Climate change is not only caused by human forces or natural forces like volcanic eruptions or any changes in naturally occurring greenhouse gases but both forces are equally contributing to the cause of climate change.

Rising temperature and sea levels, melting glaciers, severe drought, ecosystems, human societies, etc are seen as the result of climate change which directly and indirectly affects human society and ecosystems. People with disabilities are the most vulnerable groups to the 21st century's biggest problem, climatic change.

People with disabilities are a diverse group of people with any condition of the body or mind (impairment) that makes it more difficult to do certain activities (activity limitation) and interact with the world around them (participation restriction). 1 in 7 people in the world has some form of disability in which all are the victim of climate change directly or indirectly. 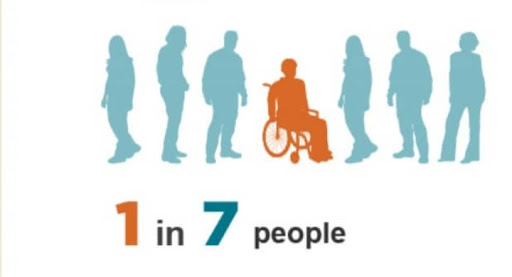 The World Report on Disability shows that 82% of people with disabilities in developing countries live below the poverty line. Poverty may maximize the hardship of disability through poor health conditions, no access to education, poor working conditions, and lack of access to safe water and sanitation. Similarly, people with disabilities have higher mortality and morbidity rates during an emergency, like an earthquake, flood, and volcanic eruption which makes them difficulties in free movement.